CLARION, Pa. (EYT) – A Clarion man recently found himself in the middle of a massive media storm after his idea to have a “Scream” themed party at the house where the original movie was filmed became a reality.

Nate Ragon, a Clarion native, grew up in the borough and graduated from Clarion Area High School in 2002. As a child, the lure of the forbidden led him to discover a taste for scary movies.

“I think I was fascinated the moment I was told something was ‘too bad’ for me to watch at age seven. Then I was determined to see why,” he said.

“But, I’d say the first actual horror film I ever saw was ‘Friday the 13th’ when I was about eight. To this day, it’s still my favorite.”

His first experience watching the movie “Scream” happened right here in Clarion, at the now-defunct Orpheum Theater. He was taken with the movie from that very first viewing, and though he followed and enjoyed the sequels, he still considers the original unrivaled.

“I think the first ‘Scream’ is absolutely the best. However, I think what Kevin and Wes did with ‘Scream 2’ was amazing, and they somehow wrote, directed, and released a sequel in less than a year that was almost better than the original,” Ragon said.

“I always say that ‘Scream 2’ is a perfect sequel, but a near-perfect film. Near perfect because there are a few flaws, in my opinion, with the ending. But, that was no fault of that filmmakers. ‘Scream 2’ which was filmed in 1997, was actually the first film that was majorly affected by an internet script leak. The final pages that revealed the killers leaked online during production. So, they had to make a quick change.”

It was just a few short years after the release of the first “Scream” film that Rago
n took his fandom to the next level.

“I was about 16 when I acquired my first screen used prop from a movie. And, that kind of was the start of everything that’s happened to me since then.”

Ragon began not only collecting, but also learning more about the horror films and the industry. He is now considered a movie prop and memorabilia expert. He started his own foray into the film industry after he was given the opportunity to be involved with a documentary on the “Scream” films.

“In 2010, I was interviewed for the documentary ‘Still Screaming,’ which is a feature-length documentary on the ‘Scream’ films. That was produced by Anthony Masi, who is my partner in this event. And, it was directed by Ryan Turek, who went on to become Director of Development at Blumhouse. Also that year, I worked as a creative consultant on ‘Scream 4’ for Miramax.”

“‘Scream’ came back in a big way that year, which led to a lot of other things. I wrote several articles for HorrorHound Magazine, and I worked on the Ghost Face action figure for NECA Toys. I also did work on the 2013 film ‘Out of the Furnace’, and the A&E show ‘Those Who Kill.'”

His love of horror films has also lead to some travel after discovering opportunities to visit the filming locations of some of his favorites.

“I love the feeling of seeing them in person. It’s such a surreal feeling. I’ve visited a lot over the years, but I always had a bucket list of ones I still wanted to. ‘Scream’ was one. And, of course, ‘Friday the 13th.’ In 2014, I went to New Jersey to take an official tour of the camp where they filmed the original movie. It’s an active Boy Scouts camp today, so the tours are rare. It was one of the greatest days of my life. I had a blast! Completely surreal. I didn’t want to leave.”

“After that, I started to notice how popular things like that event were getting. The ‘Christmas Story’ House in Ohio, for example, or Hannibal Lecter’s holding cell that was filmed in the Soldiers and Sailors Museum in Pittsburgh, and they started doing events around Halloween, and so many other places,” he continued.

Knowing his penchant for visiting filming locations, his friends and fellow horror fans always kept him up to date on any opportunities they came across.

“In 2017, it was brought to my attention that the house from ‘Scream’ was available to rent for huge weddings and large corporate events, but the rumor was that the owners wanted nothing to do with ‘Scream,'” Ragon said.

“Then, in April of this year, someone sent me a photo of a wedding at the house. The bride and groom photos featured them being chased by Ghost Face in front of the house. I thought it was the coolest thing! So, that night, as I was trying to go to sleep, I kept thinking how cool it would be to have a massive ‘Scream’ event at the house.”

Haunted by the idea, Ragon couldn’t resist reaching out to someone else he believed might be interested.

“I got out of bed and texted Anthony about the idea. He loved it, and we immediately began work on it the next day,” Ragon said. Anthony Masi, Ragon’s partner in “Scream Comes Home” event planning, owns MasiMedia and has written, directed, and produced content for multiple production companies including Starz and Lionsgate. He is also well-known as a producer of successful cinematic retrospectives on the horror genre.

Masi also had experience in event planning, having been the creator of the very first themed convention called “Halloween Returns to Haddonfield: The 25Th Anniversary Convention.” The convention, which was a resounding success, attracted fans from all over the world to celebrate the classic ‘Halloween’ films. It was so successful, in fact, that it is still replicated every five years in the same location.

The duo put their heads together and cautiously approached the house’s owners with their idea. They were gratified to find that the previous rumors about the owner’s desire to disconnect the house from the “Scream” film were entirely unfounded.

“They were very cool with the idea,” Ragon said. “They found it very exciting! Anthony’s credentials as a producer in Hollywood also helped.”

The homeowner’s positive reaction set off a chain of events that have rocked Ragon’s life.

“This has been so insane. It started as this little tiny thing and then blew up.”

“We thought the TMZ article was cool but didn’t expect much after. Then within twenty minutes, it was like TMZ on TV, E! News, and like every major news outlet. So crazy.”

Though excited and overjoyed at the media and fan reception of the “Scream Comes Home” event, between working his regular day job at Cricket Wireless, raising his son (with an appreciation for horror films, of course), and the event planning, Ragon has found himself with a lot on his plate.

“I work my regular job nine hours a day and then plan this what feels like 24/7. Plus (Masi) is in California, so the three hour time difference is a nightmare.”

They planned for several levels of ticket packages, with least expensive being a ticket to a screening of the film on the lawn beside the house, ranging through several mid-level options that include filming location bus tours and a props museum, up to the most expensive package including an overnight stay inside the house itself.

When the tickets were released, the overnight stay tickets sold out in just two days.

“I was very surprised!” Ragon said. “But I realized we were definitely off to a great start.”

They also decided to create several other very special packages after another “Scream” fan reached out to them.

“They are an amazing metalcore band who are currently touring on the Vans Warped Tour. The lead singer, Spencer Charnas, is a huge horror fan. He reached out to us and has been amazing. We partnered with him and created an exclusive Ice Nine Kills experience level, and they kept selling out as fast as we put them up so we kept adding more. He will be with us at the house on Saturday for the main event, as well as Friday night for the VIP party.” 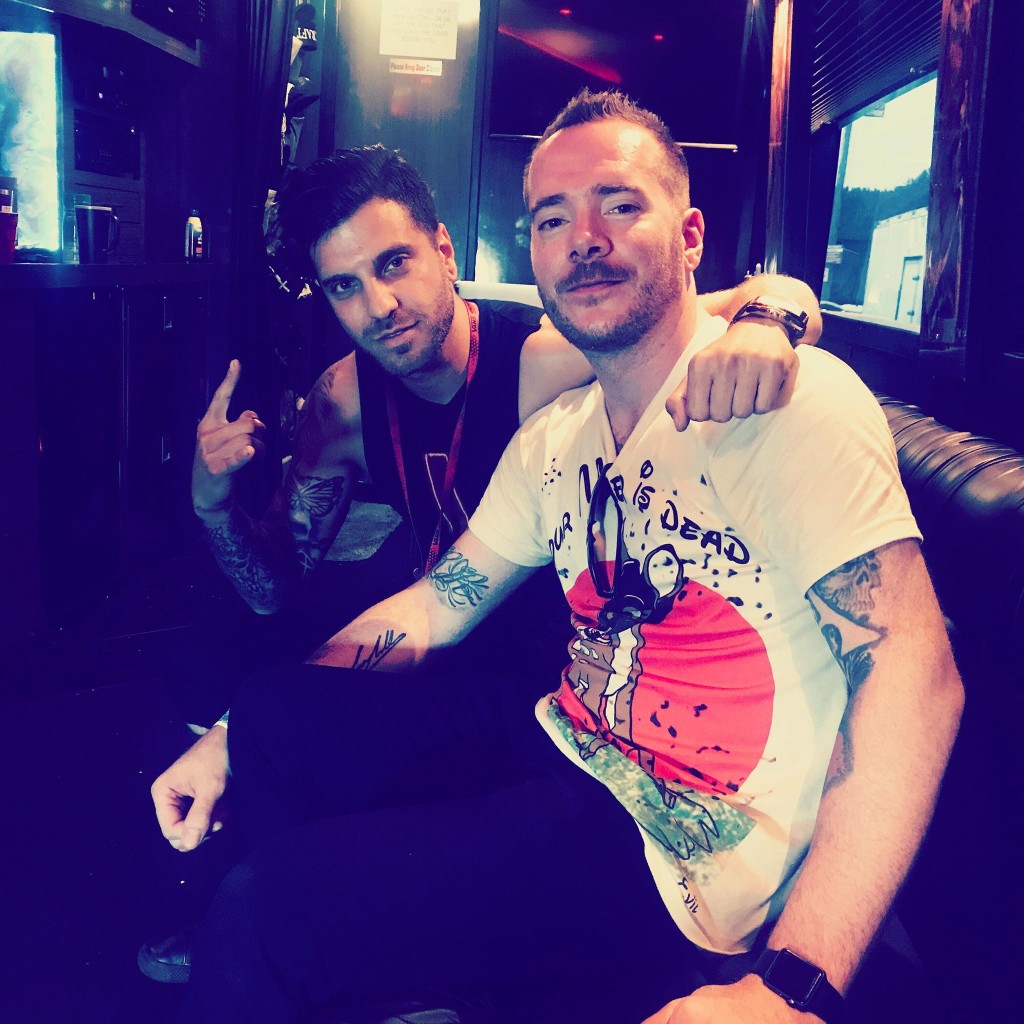 Even with the addition of Charnas and the Ice Nine Kills special packages, Ragon and Masi still wanted to take the event to another level and decided to push things a little further.

“We reached out to a handful of cast members,” Ragon said.

“There’s a lot of red tape involved with that, dealing with managers, agents, and getting people to understand that our event is not a huge three-day long convention with thousands of attendees. We were able to secure Roger Jackson, the voice actor who was the voice of Ghost Face, on the phone that way.”

They didn’t stop there and, according to Ragon, the media storm that swept them up recently got the attention of at least one of the cast members they’d been reaching out to, though Ragon was unable to say which cast member or how they might be involved yet.

Though the duo isn’t ready to make an official announcement about any possible cast member involvement, they did make it clear that they’re hoping to have even more surprises in store.

One other thing making the “Scream Comes Home” event particularly special is that it will most likely be a one-time only event.

“The owners are pulling the home from rentals next year. So, this is literally a once in a lifetime thing,” Ragon said.

Though he won’t be planning a repeat of this event, Ragon’s event planning days don’t appear to be over.

“Anthony and I are already in the early planning stages of another similar event that we are hoping to launch in 2019. It will be along the same lines, but a more unique experience as it will be a celebration of two different movies that shared the same filming location.”

“We hope to do more work with the band Ice Nine Kills, as well as with Kenny Caperton. Kenny is hosting our screening of ‘Scream’, and he has a company called ‘On Set Cinema’ which specializes in screening movies at the actual locations where they were filmed.”

“There is one other project that we have already begun working on. It was brought to our attention in the middle of planning this event, and we are very excited to be a part of it. I cannot say anything about it yet but can confirm that it is horror related, and will also see a worldwide audience.”

For those interested in “Scream Comes Home” tickets, visit www.screamcomeshome.com.